Join this pub trail leading you across the Royal Borough of Kingston upon Thames, highlighting heritage and maybe helping you to discover your new favourite local.

The Heritage Trail visits 12 pubs across the borough, and has somewhere for everyone, from real ale enthusiasts to families and Sunday roast connoisseurs. With the support of Kingston University and CAMRA we highlight some of the special places in Kingston where drinks and stories have been shared for generations from the oldest pub in Kingston to the downright wacky, we celebrate these cultural hubs.

Use the embeded map and follow the text below or download the PDF version at the bottom of the page.

The building dates back to the early 16th century, making it Kingston’s oldest pub. Located at Kingston’s Market Square, the Druid's Head maintained its use till the present day. It was before known as “Shiner Walker”, but then changed the name in 1832 by the landlord who was a member of the Ancient Order of the Druids. The pub offers a beautiful patio garden area and modern-style interiors. In 2019, it has been accredited for beer quality. Druids Head is also well known for their burgers, especially their signature dish “fried chicken ranch burger”, highly recommended.

This pub is within walking distance of Kingston’s town centre, situated by the river in the splendid location of Canbury Gardens. It offers stunning views of the River Thames, to especially enjoy on sunny summer days. It is a former club room built in the 1960s and has been a pub since the mid-1980s. It hosts quiz nights on Tuesday, Sunday evening jazz is played from 8pm and has a friendly community vibe at quieter times. It claims to have been favoured in the past by both Norman Wisdom and Michael Barrymore. It is a member of CAMRA's LocALE scheme to promote local breweries.

At Willoughby Road on the corner with Lowther Road is located the Willoughby Arms, a Victorian back-street local pub. The oldest record of this pub goes back to 1885 as Hodgson's "new house", when he applied to have the spirit license transferred there from the Black Lion in Old Bridge Street but didn’t succeed. The pub was successively sold several times during the years and now is part of Enterprise Inns. It is also a member of the Society for the Preservation of Beer, hosting two real ale festivals per year. The beer is sourced from small breweries, and they are known for their pizza and pies.

On the corner of Queens Road at Kingston Hill is located The Albert, a Victorian building erected in 1855 according to the sign right outside the pub, and this matches with a record of spirit licence request in 1860. Since the beginning, the pub has always been part of the Young family, at different times it offered accommodation and in 1971 was called “The Albert hotel”. It was refurbished several times till the most recent in 2007, getting redesigned in a modern style. Towards the end of the 19th century, the pub is reputed to have been a favoured stopping place for the Household Cavalry en route between Buckingham Palace and Windsor Castle. The Albert also offers a terrace and outside seating in front of the pub. Their speciality is Pork Belly available only on Sunday and Apple Crumble dessert.

In origin, this pub was known as the Joiners Arms. In the 1850s the pub’s name changed to the Cocoanut, named after the local coca fibre industry nearby Hogsmill River. The fibre processing at the mill stopped in 1880 but the pub kept the name. The Cocoanut is hidden on a quiet residential street in Kingston, it offers the traditional English pub experience but with a twist, being home to one of the finest Thai restaurants in town. Not only it offers award-winning ales but also a special selection of wines. The pleasant back beer garden offers plenty of sun in summer but also outdoor heating during winter. The Cocoanut was awarded “Master Cellarman '' by Fuller’s in 2013. Interesting connection with university art students who exhibit their paintings on the walls.

In 2010 the pub acquired the name of the Berry, but the old signs remained in place. It is located near Berrylands Station and was built in 1930. It started as a Hodgsons’s pub and through the years had several owners until the latest Greene King which is still in business. The pub satisfies everyone with its three separate areas, one aimed at sports and darts board, the middle one which has a large screen tv meant for adults and the lower area is aimed at families and it does not have a bar. A patio located in front of the pub offers facilities for smokers and it also has a rear garden for sunny days. Guest beers include local brewers.

The Watchman is a Wetherspoon pub that occupies the former New Malden police station, which was originally built in 1892. In 1881, constable Frederick Atkins was fatally shot in the line of duty and hence a remembrance plaque can be found in the garden. While locals opposed J D Wetherspoon turning this monument into another pub after a five-year campaign The Watchman finally opened in 2012. The menu includes hearty full English breakfasts, some of the nation's favorite dishes, and traditional pub classics.

Woodies is a family-friendly Free House in New Malden. It was originally the sports pavilion for Fyffes turned into an award-winning Free House. In 1984, it appeared in the Good Beer Guide which was just a year after it opened. This pub hosts summer weekend barbecues and home-cooked meals; they are known for their seafood platter. Woodies' unique interior design has been described as resembling Aladdin's cave with memorabilia dating back to the last century. The pub offers quiz nights, sports on big screens, and is a CAMRA favorite.

William Bourne, formerly known as The Gate or Bonesgate, is a pub that has been in operation since 1785. In 1886, The Gate was the finishing point for a steeplechase. The race caused considerable excitement in the neighbourhood. The farmers over whose lands had been ridden and various huntsmen were often entertained to dinner afterwards by the master of the local draghounds. The pub now offers an all-day breakfast, live sports, quiz nights, darts and pool, and bingo nights. Their most popular dish is the mixed grill which includes different steaks, chicken, sausage, and eggs.

The Shy Horse, originally named The Fox and Hounds, is a pub restaurant in operation since the 19th century. The pub was granted a wine licence in 1933 and then a full licence in 1938. They offer a selection of cask ales, fine wines, and British gins to be enjoyed by the crackling log fires. In 2000 the pub was bought by Vintage inns who refurbished it and changed its name. The Shy Horse is one of two hundred country pubs run by the Vintage Inns. The kitchen is country style and offers country pub seasonal classics. Live music is played every last Friday of the month while Tuesdays are reserved for quiz nights.

The North Star is a traditional pub that has been in operation since 1838. With a spacious beer garden, it is the perfect location for good quality pub food and a drink. The pub hosts burger nights on Tuesdays, grill nights on Thursdays, and roasts on Sundays, it is known for their Ribeye steak. Ale Club on Mondays and Thursdays, when all real ales are cheaper. The beers are from the Ember Inns list, which changes monthly, and can be from regionals or the larger micros. The 1986 CAMRA guide showed that crib, shove ha'penny, bar skittles and dominoes were all still played in the North Star.

The Lamb is a quirky pub and community hub that offers British cheese, a monthly cheese club, and even cheese art.  The pub was a family owned beerhouse that first appeared in 1855 and had its own brewery.  It was not allowed to sell wine until 1947 and was only granted a full licence in 1952, for which the owner had to pay £1,700. In 2007, the pub was sold to its new owners after years of being empty and its new landlords turned it into a 'community pub' that offers entertainment that includes live music, cheese nights, circus performances, and many other events. The Lamb offers a unique dining experience by hosting different guest chefs for lunch and dinner. This pub gained various awards from CAMRA. 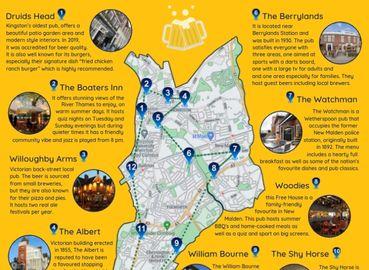 Download a PDF of the trail, containing photos of the locations, Summaries of the sites and a view of the overall trail. 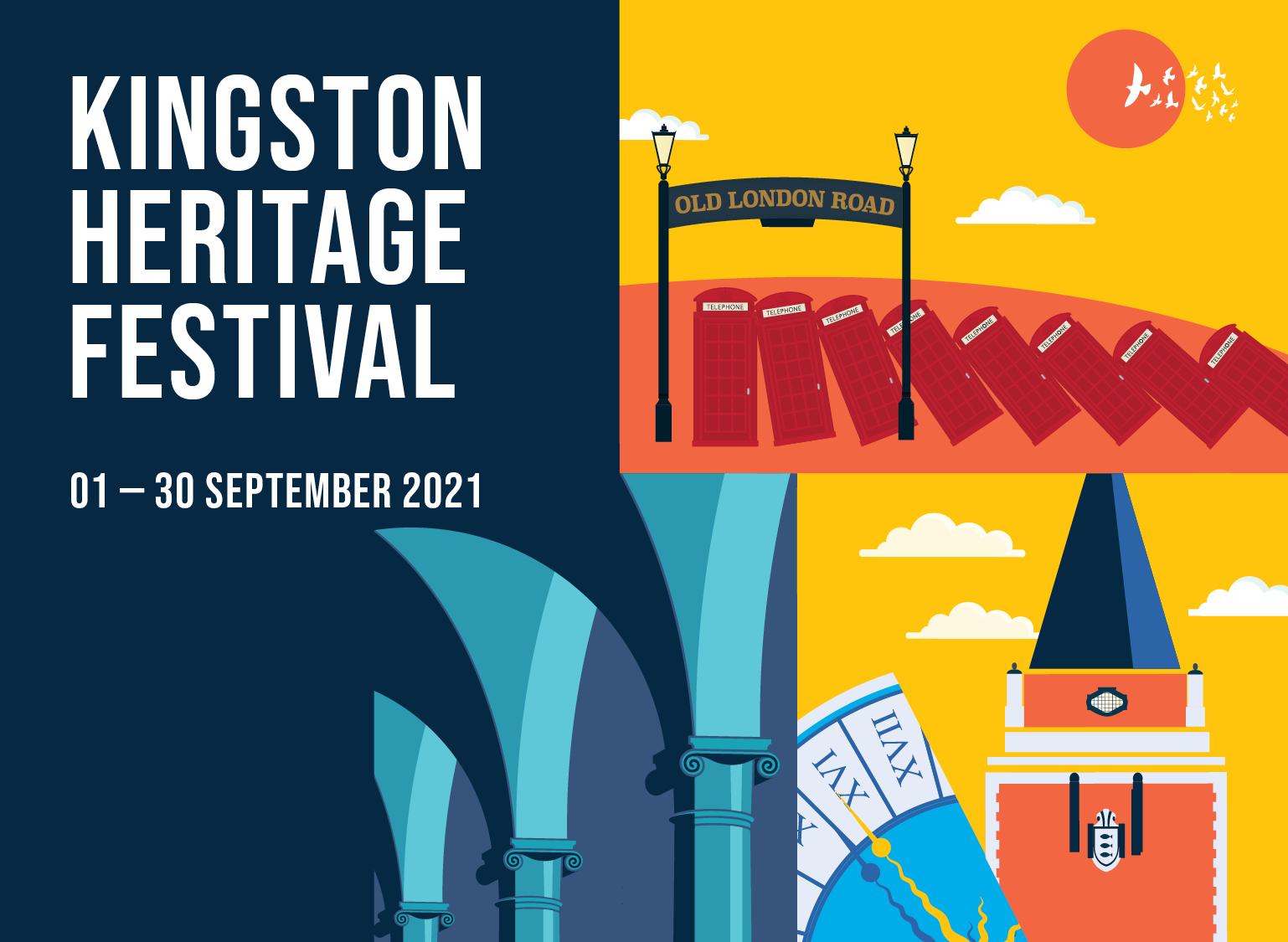 This activity is part of Kingston Heritage Festival, find out more about the project.